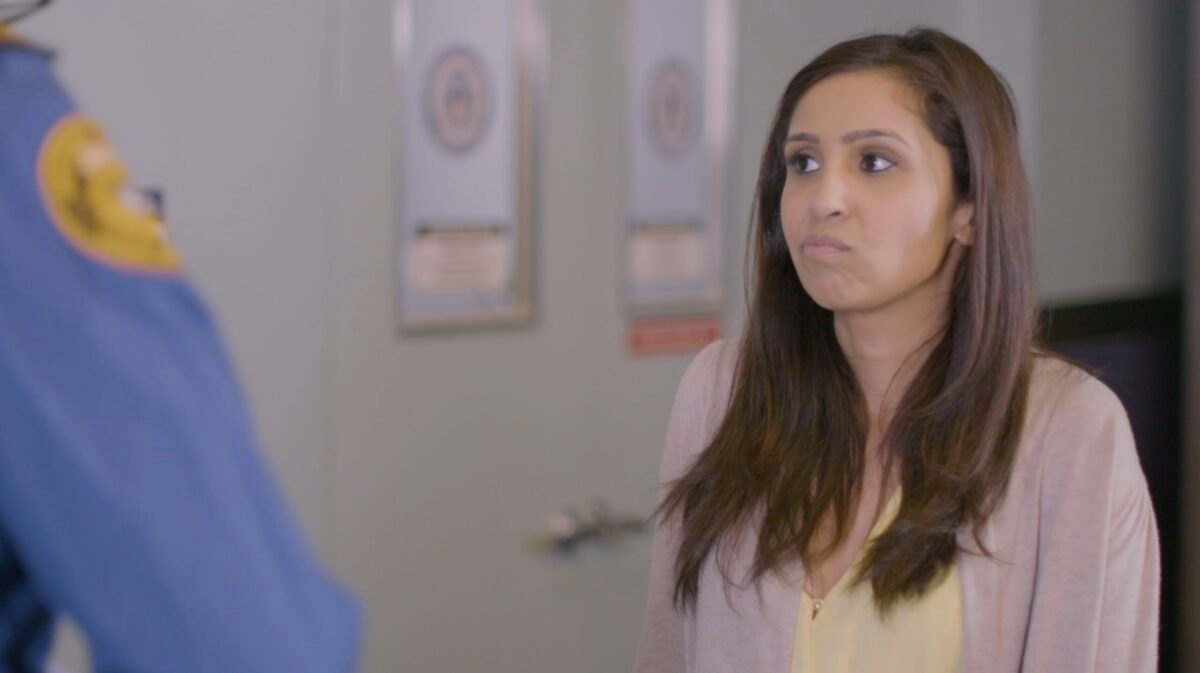 NOT into reading? LISTEN to the audio version instead! (Or listen to me narrate along as you read the text. Best of both worlds? #AudioBlog)

I am ready to move on from my past.

I am ready to move on from something I once loved.

I am ready to move on from a project that I once thought was ‘the one.’

Not-so-quick backstory: I had an idea – or well, an inkling, a whisper/nudge from my inner self – in 2014 to write a sitcom based in a local newsroom. Those were the only instructions (inner self’s logic likely based in the idea of combining the areas of work I had experience in — news and scripted comedy writing. At that point, I had a dozen Instacurity webseries scripts that were actually produced with over 300,000 views and a New Girl script I had written for my UCLA sitcom writing class that eventually got me into an ABC-Disney writer’s workshop at that time. I was also working overnight at NBC as my “day” – err night – job. After work wrapped at 8am, I’d walk around the NBCUniversal lot, get my steps in, grab OJ and an egg sandwich from Backstage Cafe across from Stage 27, roam around, and think, “it would be fun to film here one day.” Especially having worked in a newsroom on the same lot, the idea of working on a show ABOUT a newsroom there felt like the best of both worlds. Plus, NBC was the place for a workplace sitcom. Hello, Parks and Rec?! 30 Rock?! The dream. And at that point I had experienced life in local newsrooms as both an intern and a journalist in Fresno, Bakersfield, LA and Massachusetts. Long story long, I felt like I had enough to draw from.)

Since then, some version of a fictionalized, ensemble cast newsroom-based show has existed in my mind, a show concept that took up most of my creative writing focus from 2015 to 2018. It was a project I had invested my Arizona years writing and rewriting, tweaking and modifying. The passion project I had devoted myself to on weekends, as my weekdays were devoted to…being in another newsroom.

There were many iterations of this project: location changes, character changes, show title changes, plot changes. Lots of…change (and almost a year in Arizona where I had just thought, ‘Screw it, I’m just gonna do the news forever because I’m good enough at it’, got a broadcast agent at a top agency in NYC, and ‘quit’ working on the scripted TV dream. Oh, 2017.)

I was in Arizona recently and a couple of friends (friends who had been witness to the AZ era of my creative journey) asked about the project.

And that’s when I realized, “Oops – they have no idea I’m working on something else.”

Yep. I pivoted away from a workplace comedy to focus on a more authentic storyline (with humor still involved, of course.)

I showed them scenes from the new idea I had been working on in the last year. They were excited. It felt more me. More entertaining and more fitting. In fact, their reaction made me want to share at least one clip online.

But then I thought, “Wait SK – you can’t just post a sample of your new concept. You have unfinished business – you never shared a sample from your last one!”

The opening scene I shot in 2018…what had been holding me back?

INNER VOICE: Why didn’t you share the scene back then?

SK: Well because I thought people would see a version of it on TV one day.

INNER VOICE: And then when you moved on to another idea in 2019, why didn’t you share it then?

SK: Because it was still something that could be made for TV.

INNER VOICE: So you just left it in an ambiguous state.

INNER VOICE: But you don’t want to make that show anymore. So if you leave its status ambiguous, because of ‘hope’, then what are you hoping for now specifically, if it’s not making that show?

And that’s when I realized…I didn’t have an answer (yep, Samia Khan, actually speechless, with no quick-witted response, either. You win, Inner Voice.)

If I’m honest with myself, this feels like it has something to do with my former overachiever self’s fear of failure (you know, the issue we learned I struggled with in blog post #1. My identity that’s attached to success or perfectionism or always being right – this is a recurring theme, huh?)

Maybe subconsciously I didn’t want to share this 2018 clip “publicly” (other than with my close inner circle of friends) because I had a fear that the show might not get made (I mean, only like .001% of scripts ever really get made, right?)

And if this is yet another lesson that shines a spotlight on my ‘fear of failure’ issue – what can I do to overcome it? Do I have to just go into things expecting that everything fails (what I joked about in blog #1) or is there a better way to look at it? Were there successes I just wasn’t paying attention to?

I started thinking more about this. So many creatives start projects and even sell projects and scripts that NEVER actually see the light of day.

This is just part of the process of being in this game.

Couldn’t I view just getting through this much of the process as a success?

The writing and rewriting, the revisions, getting a literary manager (hi Leslie!), filming a proof-of-concept scene, making various versions of a final video edit, sending it out to industry people, getting actual meetings – this is just the process.

And…part of that process, looking back, included some successes.

Successes that ultimately remind me of what I have to offer and serve as motivation moving forward.

Actually, come to think of it, that aforementioned meeting was actually with Anonymous Content, a production company that was making a workplace sitcom. With NBC. One based in…a newsroom. (Wait. Did I do all that work over the course of 3-4 years just to form this friendship? The Universe really wants us to be friends, it seems.)

And even with that show, a show that had major celebrity names attached, a show that was written about in the trade magazines, a show I was likely going to write on…after months of being in limbo…it never got made.

Yep. Yet another example of the process of being in this game.

Looking back, that Inner Self whisper of 2014 (when I was working at NBC) was simply that I “should write a sitcom pilot script based in a local newsroom” – it was about the writing, not the making.

What if the newsroom-based pilot script’s purpose was never actually to be used for the show I’d eventually make, but rather, to just practice the process?

The trial before the actual run?

The dress rehearsal before the debut?

The boyfriend before the husband? [*smirk*]

Fear of failure shouldn’t have even been a concern. That pilot script was a success. Sure, I didn’t make that show. But I made something better for me at that time. I made progress in the process. Trust the process.

Basically, its about the journey, not the destination.

Especially since I have a new destination, this 2020 idea. The one I can fully focus on…well, after I finish my unfinished business.

This is the opening scene of that newsroom-based pilot script I had written (interestingly enough, the one scene I chose to film from it…didn’t take place in a newsroom at all. Maybe my subconscious knew that I was going to stray from the workplace setting? Also…fast forward to 2020, and “workplaces” in the COVID era don’t really exist, so…smart pivot?)

Fun Fact: this scene is a recreation of an incident that actually took place at an airport in November 2016 – the weekend after Trump’s election. Um. That’s all I’m going to say for now.

Special thanks to everyone who helped make this scene a success. You are appreciated.

P.S. Because you know I live for signs, I have to include this. A couple days ago, I read an article featuring Issa Rae, someone I’ve worked with and who I share a few close mutual friends with, someone I’ve been lucky enough to watch grow into the powerhouse that she now is. In the article (a targeted ad I clicked on Facebook), she talks about the making of Insecure, the rewrites, thinking it was all over, and pivoting away from the workplace sitcom idea she had been working on. [See screenshots below]

Coincidence? Maybe. But…I’m taking it as a sign (especially since Issa Rae’s production company ColorCreative was going to be co-producing that NBC workplace newsroom sitcom that I had met with Anonymous Content about. The meeting I gained a friend from. Yep, everything is connected.)

Wish I wouldn’t have worry about what other people thought
And felt comfortable in myself
Me, you and that futon, we’d just begun
On the grass, dreaming, figuring out who I was
Those good old days

Maybe these are the moments
Maybe I’ve been missing what it’s about
Been scared of the future, thinking about the past
While missing out on now
We’ve come so far, I guess I’m proud

(Because this song, at the core of it, is about the process of pursuing dreams, and how those days are the ones you’ll eventually long for. It seemed fitting. Enjoy. I’ll see you guys next week. — 💜SK)

ICYMI…PREVIOUS BLOG POST: How Everyone Can Find & Live Their Purpose – Yes, Even in the COVID Era